I came home to a present today. Actually, I think that the present was already on my back porch when I left for the store an hour before...because it had foot prints on it that looked an awful lot like the sandals that I was wearing! 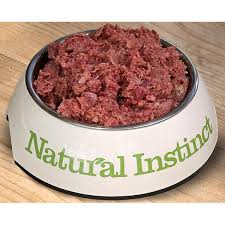 When I arrived back home, I noticed that there was something squished on the mat at the rear of our house. Upon further examination, I discovered that it was a mouse head in a pile of vomit left by a neighbor's cat.

Because we used to have cats as pets, I recognized this was the generous endowment from a feline who was offering it as a way of expressing its love for me.

Or else the cat thought that I wouldn't mind it if they puked on my back porch; thus affirming my reasons for no longer having any pets!

Either way, I was left to clean it up.

And I was grateful that it was from a cat on my back porch and not from the Corleones as a veiled threat, otherwise the cat would have left it in my bed!

When I see gifts left in my yard from cats like half-eaten mice, shrews, bunnies, or birds, I often wonder; "Where is the rest of the animal?" 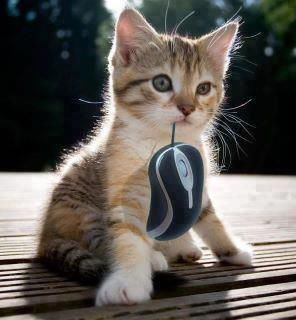 Or "Why did they want to share it with me?"

I know that they have their reasons. Cats are naturally hunters and seem to be wired to teach their young how to eat their food by bringing home dead or injured prey as well as to share their bounty with their family.

So, I can deduce that when they are leaving a dead animal on my back porch, the cat is simply acting out its natural role as mother and provider and consider me to be a part of its family.

I also wonder how deceptive the cat had to be to sneak up on such unsuspecting animals who had no idea that their life would end so abruptly on that day.

How was it that the animal had no clue that they were about to be killed?

What could the animal have done to prevent its death being a forgone conclusion?

Perhaps it was unbalanced and undisciplined and didn't have a sober mindset.

Perhaps it was because the animal wasn't alert; so self-focused that it didn't pay any attention to its surroundings. Or if it did pay attention and was alert and cautious, it didn't do it at ALL times.

Perhaps it was because it didn't realize that it had an actual enemy who prowled around fiercely hungry, seeking someone to devour.

Perhaps the animal, when seeing the cat coming, didn't resist the cat against his/her attack by being digging its claws in; rooted, established, immovable. 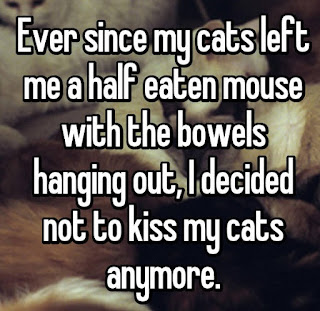 Perhaps the animals didn't know that the same experiences of suffering are being experienced by mice, shrews, bunnies, and birds (as well as other animals such as lizards) throughout the world.

Perhaps we would do well to learn our lesson from their mistakes if we don't want to end up as cat food.

“Be sober [well balanced and self-disciplined], be alert and cautious at all times. That enemy of yours, the devil, prowls around like a roaring lion [fiercely hungry], seeking someone to devour. But resist him, be firm in your faith [against his attack—rooted, established, immovable], knowing that the same experiences of suffering are being experienced by your brothers and sisters throughout the world. [You do not suffer alone.]” (1 PETER 5:8-9 AMP)