"Buried Halfway Up My Hubcaps in Mud" 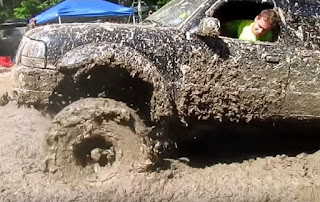 The plan was pretty simple: Take the day off and head to the family cabin in Wisconsin with Cathy and a load of furniture and some other items.

I also needed to reinstall a sign that I had removed in the fall to re-carve and paint the lettering, and then apply many coats of lacquer to make it last for another twenty five years or so. Afterwards, we would go to a local restaurant to eat lunch and then head home.

Other than that we had no real agenda. We both had been working way too many hours with no end in sight and thought that this would be a good way to spend the day together.

We spent the ninety minute drive listening to an old sermon that boosted our faith. After the message was done, we discussed how the Lord had used that message in our lives (individually and as a couple) over the past thirty some years.

We arrived at the cabin full of faith and ready to face the challenges of life. Little did we realize how quickly it would be put into action.

For some reason, the weather at the cabin always seems to be a couple of weeks behind the weather in Minnesota so it didn't surprise us to see that there was still some snow on the ground and ice on the lake.

What did surprise us was that the driveway, which appeared to be solid (like in Minnesota), was actually in process of having the frost go out of it. This was a fact that would have been nice to know a few minutes earlier...

I put the truck in reverse and started to backup into the driveway so that it would be easier to unload the truck.

As soon as the rear tires were five feet on the driveway, Cathy noticed that the tires were starting to spin a bit.

Because it was on the North side of the property, I reasoned that's it must just be ice and proceeded to continue to back up another five feet. At this point the front tires also started to spin. Cathy suggested that I go forward; I reasoned that if I continued backwards a bit further I could get a longer runway to head over the ice. 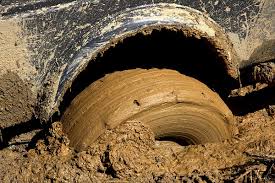 Because I am persistent, I continued to attempt to drive forward and backwards not realizing that it wasn't ice, but mud, because of frost leaving the ground. Again, this was a fact that would have been nice to know a few minutes earlier...

In record time I buried the truck up halfway up my tires in wet mud comprised of clay and sand and my attempts to drive it out only made things worse.

Cathy and I got out to assess the situation. Cathy suggested that I drive while she pushed. I showed her the mud-covered side mirrors and said that I wouldn't suggest that we try that option.

Instead, we changed out of our shoes into the boots that we had brought just in case the soil was wet and made a scavenger trip to the surrounding cabins (and ours) to look for wood to place under the wheels; rationalizing that this was no different than getting a vehicle out of snow.

After we rounded up some materials, and placed it under the vehicle and tires, I got in and attempted to drive out.

This only seemed to irritate the soil as it pulled us into its grip even deeper like it was made of quicksand. Bobby Goodson's team (of the Discovery Channel's "Swamp Loggers") had faced nothing of this magnitude as very quickly we were even deeper in the mud. 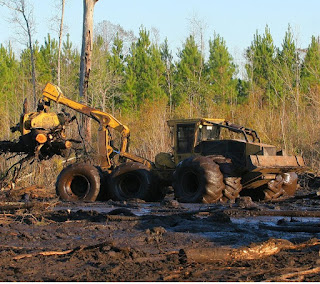 Cathy recalled that her brother had also gotten his truck stuck in the exact spot one year ago. I concluded that it was time to stop and ask for help.

I called a local towing company who came over and used their tow truck to pull us out of the mud onto the blacktop on road just ten feet away. After hooking us up, it took him less than a minute to pull the ruck out of the mud.

I thanked him as I paid the bill for his promptness and because he changed his plans to come over fairly quickly.

I looked at the truck as Cathy looked at me. She said that she appreciated that I had not gotten upset. I told her that this was our adventure and made reference to the sermon that we had listened to on the way up to the cabin.

I also said that now it looked like a real truck as together we observed our truck that was clean on the ride up and was now covered in mud that was two inches thick. 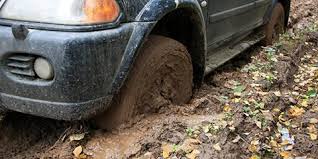 I wasn't upset in any way; I had simply misjudged the situation and deducted that the driveway was more solid than it was. I thought that I was on solid ground, not "quicksand" mud.

It made me think of what other areas of my life was I also misreading the solidness of my ground...

The old spiritual hymn professes that on Christ the solid Rock I stand, but am I truly standing on Christ and Christ ALONE? I deduced that the only way to really find out how firm my ground was is to go through the trials of life. It is then and only then that I see whether or not my anchor holds and whether or not the ground holds under the weight of life.

I am glad that in this "test" I was able to respond in faith that He would come to my rescue; that I would get out. I am grateful that once again the LORD was faithful:

I waited patiently for the Lord to help me, and he turned to me and heard my cry. He lifted me out of the pit of despair, out of the mud and the mire. He set my feet on solid ground and steadied me as I walked along. He has given me a new song to sing, a hymn of praise to our God. Many will see what He has done and be amazed. They will put their trust in the Lord. (Psalm 40:1-3 NLT)

I'm not sure where you are at today or how buried you are as you attempt to get yourself unstuck.

My advice to you is to simply stop and ask for help. There is One who is so very much interested in your situation and is available to help you. He WANTS to help you no matter what you did to get yourself in your current situation.

He simply wants you to acknowledge the reality of your situation and cry out to Him. And He will help you and get you once again back on solid ground.

He's waiting for you to ask Him...

The Solid Rock by Edward Mote
1.   My hope is built on nothing less
Than Jesus’ blood and righteousness;
I dare not trust the sweetest frame,
But wholly lean on Jesus’ name.

2.   When darkness veils His lovely face,
I rest on His unchanging grace;
In every high and stormy gale,
My anchor holds within the veil.

3.   His oath, His covenant, His blood
Support me in the whelming flood;
When all around my soul gives way,
He then is all my hope and stay.

4.   When He shall come with trumpet sound,
Oh, may I then in Him be found;
Dressed in His righteousness alone,
Faultless to stand before the throne.